So, you’re hosting a tailgate party. Depending on the sporting event, tailgate parties can last up to 5 or more hours – it might be prudent to have some entertainment planned! In this article, we will explore some of the most popular tailgate games that will help your party go from uneventful to enjoyable.

Ladder golf is a tailgate game that is easy to set up, easy to learn, and easy to like! To play, players toss a “bola” (two balls connected by a string) at a ladder that generally has three rungs. The goal is to get the bola to wrap around one of the rungs of the ladder.  Wrapping the bola around the top rung scores 1 point, the middle rung scores 2, and the lowest rung earns the player 3 points. Scoring this tailgate game is easy as well – the first player (or team) to reach 21 points wins!

Ladder golf sets are available on Amazon for as low as $32.99 with free shipping, but with some PVC pipe, a drill, and some string, you could easily create your own set for much cheaper. The set up of most sets is as simple as popping the ladders into their bases, setting them about 15 feet apart, and forming teams to play.

Ah, cornhole. The classic game that has been a staple at tailgate parties for years, and for good reason! Cornhole is another tailgate game that is easy to set up, and can be played just about anywhere you have 27 feet and willing players! Cornhole consists of two rectangular boards, each with a hole on one end, and 8 bags (4 of each color) that players toss into the hole of the cornhole boards. The team that reaches 21 points first, through a combination of “woodies” (bags that land and remain on the surface of the board) and cornholes (bags that go through the hole of the board), wins the game.


Each woody is worth 1 point, and each cornhole is worth 3.  For more detailed information on cornhole rules, follow this link.


One of the coolest features of including cornhole in your tailgate game repertoire is the option to customize a set of boards for your favorite team. There are many companies that offer a variety of pre-made boards for different teams, as well as a totally customizable sets that can display anything you’d like. For a more hands-on, budget friendly approach, you can even assemble and finish a set of your own, with DIY Cornhole sets. If this is something you’re interested in, you can see what we have here at Slick Woody's.

Custom Cornhole Boards:  Why they are a great buy!  Read about it here in this fun blog article.

For a tailgate game requiring a little more skill and finesse, look no further than KanJam! KanJam involves throwing a disk at a “kan” that is open at the top, and has a slot cut in the side just big enough for the disk to fit through. Scoring is easy enough; landing the disk through the top hole earns a player 3 points, hitting the kan directly is worth 2 points, a deflected hit (where a defensive player knocks the disk into the kan) is 1 point, and slipping the disk into the narrow slot is an instant win for that team! $39.95, but I would be remiss if I didn’t casually point out that a trash can with a slot cut in it a couple Frisbees looks remarkably similar to the official set. This tailgate game is one for the more competitive and skilled folk, but is still an easy addition to any party!

You thought this was only a table top game? Well think again! Giant jenga is played exactly the same as the table top version! Players take turns removing one block at a time and then stacking it back on top! You lose the game if you knock the tower down. This game doesn't take much physical work at all so it is a great game for whatever event you are having! Giant Jenga is becoming more and more popular and making party's and tailgate events the spot to be! The Ultimate List of Party Rules for Beer Pong

Tailgate parties usually involve drinking beer, so why not make it into a game? Beer pong is a popular tailgate game involving cups of beer set up on a table, a ping-pong ball, and lots of tipsy players!


Set up is, once again, fairly simple. A table is set up (regulation size is 8’ x 2’, but literally any table will work), and cups that are about half-full of beer are set up in a pyramid shape – think bowling pins. Each team takes turns trying to either bounce or shoot a ping-pong ball into their opponent’s cups.


If they successfully land the ball into the cup, their opponent must drink the beer from the cup. Official rules state that the empty cup goes back on the table, and any ball that lands in the empty cup means that the team that threw the ball must drink one of their own cups! The beauty of beer pong, though, is its flexibility; the rules can pretty much be whatever both teams agree on! To elevate the cool-factor of your tailgate party game, consider investing in a well-made, custom tailgate table. The top of the table can be customized with a design honoring your favorite team, a football field (see left), or pretty much anything you can imagine.

Hopefully this article has given you the information you need to incorporate the perfect tailgate games into your next party. In between eating, drinking, and practicing your trash-talk, set up one of these and get your party-goers engaged in fun, easy-to-play tailgate games that will help pass the time before the BIG game! 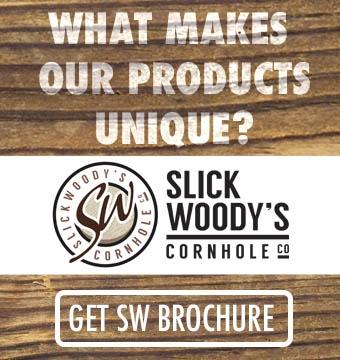